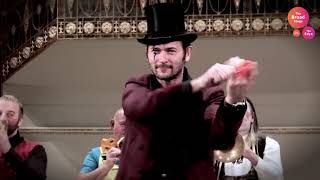 "One of the most creative and fascinating brass bands working today." — TimeOut Barcelona

This performance has been suspended. Please click here for more information.


Come one! Come all! Listen and be amazed! Austria’s rollicking Mnozil Brass displays extraordinary virtuosity and theatrical wit in Cirque, their newest show combining the monkey business of daily life with music and humor. Don’t miss this madcap evening of seven supremely gifted musicians creating an environment of controlled chaos.

Mnozil Brass has established itself as one of the world's premiere brass ensembles. Their videos have garnered millions of YouTube views and their fans have travelled countless miles to hear them play. Their shows include Yes! Yes! Yes! which blends original compositions with classical favorites, jazz standards and popular hits—and Cirque, where the musicians combat the monkey business of daily life with music and humor, and transform the stage into a musical flea circus. The repertoire is presented with the group's iconic humour and wit in scenes so clever that they would be worthy of Monty Python. Mnozil Brass take their name from the Gasthaus Mnozil, a restaurant across the street from the Vienna Conservatory, where, in 1992, seven young brass musicians met and began playing at a monthly open-mic. Since then, the group has embraced repertoire for all ages and stages of life: from folk to classical to jazz to pop; all executed with the same fearlessness, immense technical skill and typical Viennese "schmäh" (sarcastic charm). In their time away from touring, Mnozil Brass has recorded 8 albums and 6 DVDs. They've collaborated on three operetta and opera productions, and composed and recorded the music for the 2006 film Freundschaft. The group has been nominated for the Amadeus Austrian Music Award and won the prestigious Salzburger Stier Cabaret Prize.

Brass Chats speaks with Mnozil Brass' Thomas Gansch in which he details everything from falling in love with jazz to the proper pronunciation of "Mnozil." Watch the interview here.

Noted as the "Monty Python of the musical world," Mnozil Brass left audiences delighted with their blend of talent and "sarcastic charm" according to State Theatre New Jersey. Read the full interview here.